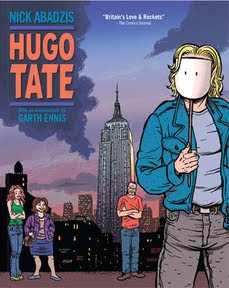 It's been too long, and the new year has turned everyone's personalities in the Claptrap studios upside down! Thankfully we have Brit cartoonist, Nick Abadzis' soothing voice to calm us down (and ease the ringing in our ears from Thien's selection of intro music. He edited the podcast this time!) Nick leads us in an engaging and thoughful conversation about his comic strip, Hugo Tate now collected by Blank Slate Books, thoughts on the rise in popularity of British comics in the U.S., his move to NY, TV sitcoms, and his exciting upcoming project that involves Orson Welles! Also new comics with Josh! What a difference a year makes! We've missed you and we're so happy we're together again!

Comic Cast in Ireland is the most fun comix podcast I've ever heard. Inkstuds is kind of dry and monotonous in comparison. You guys are nice, though.
January 10, 2013 at 10:03 AM