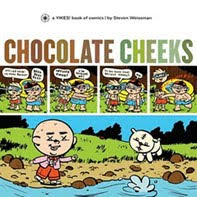 In this episode, Thien tries to convince Rina to join a new comics revolution, while Josh continues to share his love for Japanese manga as well as a new comic from Paul Grist. Better still, Thien and Rina get to talk to Harvey Award-winning and Ignatz-nominated, Steven "Ribs" Weissman who has a new book out with Fantagraphics Books called Chocolate Cheeks. In this interview, Steven talks about the origin of the Yikes! gang, shares his insight on juggling comics-making with having a family, and discusses his web comics "Barack Hussein Obama" and his contributions to the "What Things Do" comics website. We also try, in vain, to get more LA cartoonist gossip. You don't want to miss this, listen in!

Anonymous said…
Great show... I'm a huge Steve Weissman fan and was really excited when you mentioned you might be talking to him - so glad it worked out!!
March 11, 2010 at 1:55 AM