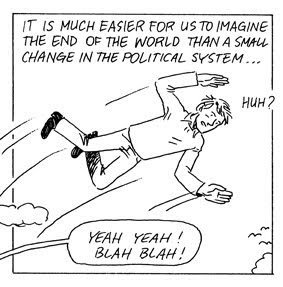 a panel from Trans Utopia by Tom Kaczynski

In this episode we talk to one of the smartest men in comics, Tom Kaczynski who just came out with a new mini-comic, Trans Utopia. We talk about his comics-making process, as well as his newly-formed comics publishing company Uncivilized Books which has produced books by Gabrielle Bell, Jon Lewis, and Daniel Thomas Wieken. Also we "try" to talk new comics with Josh, and debate about comics laureates and the fine art of critiquing comics. Have a listen, this one was fun! 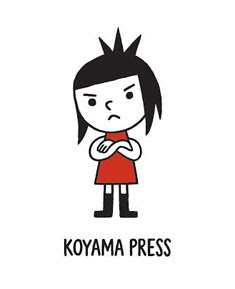 Kick Ass Annie logo, by Aaron Leighton Season 4 begins, finally! Thien returns from his Level Up! tour with Gene Yang, and Rina takes a break from ridiculous non-comics obsessions to interview thee "Kick Ass" Annie Koyama , publisher of Toronto-based Koyama Press , one of the most exciting publishing houses to start up in recent years. We talk about the experiences that jump-started her career in comics, the artists that she's worked with, and of course Toronto comics gossip and hockey/baseball mania. We also continue our fun segment, the Comix Cranktrap and crank call a "Giant" in the Asian pop culture/lifestyle magazine industry. And yes, we talk to ever so jovial, Josh Frankel about Comic Con, new books from Kate Beaton and Lewis Trondheim and the latest industry news. We've called this one the "Womyn Empowerment" episode! So, RESPECT, sista! or Download MP3 File
Read more