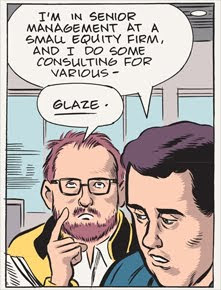 a panel from Dan Clowes' Wilson
(published by Drawn & Quarterly)

Oh wow, have we been away for a long time! Rina went on a "tour" for her book, and Thien... well, Thien changed his voice. For this season premiere, we dared to dream big, and our dream actually came true: Mr. Dan Clowes sits down to chat with us on topics ranging from Pogs to coffee shop blind dates. The experience was so mind-numbing, it induced Thien to asthmatic coughing fits. We also kick off Season 3 with yet another Ignatz awards rant and desperate plea to SPX voters by Thien, and reunite with now-veteran New Comics newsie, Ignatz-nominated Josh Frankel. This is one episode to remember so we hope you enjoy it!


("Errata Stigmata" Alert: In this episode, Rina incorrectly says that the last Comix Claptrap episode was with Dylan Horrocks. However the last episode was with James Sturm. Though James probably forgot that too. Also, the name of the comic that Rina forgets during the New Comics Reporting segment is called Birchfield Close by Jon McNaught... beautifully printed... You can get it at Nobrow Press. )

josh said…
more errata stigmata: Vanessa Davis's D&Q book does not contain the strips from the Buenaventura Press Spaniel Rage book. It has other old Spaniel Rage strips but I was confused about which were there. SORROW!
September 9, 2010 at 11:05 AM